A wise Cowboy once said, train like you play…

It was a weekend like no other at the VSC, as the most dedicated Hobie Sailors along the east coast converged upon Jervis Bay to partake in 48 hours of splendour, reminiscence and occasionally sailing.

Conditions were varied across the two and a half days. From light, fickle downwinders holding out the jib, to twin stringing into the top mark, JB provided an excellent variety of wind conditions for the sailors heading to Spain later this year for the Hobie 16 World Championships.

Along with the regular ragtag bunch from the VSC, we had a number of seasoned Hobie sailors travel to JB for the weekend. From the Royal Queensland Yacht Squadron, Peter and Juliet, along with Branchy and Carmen, made the rockstar arrival on Friday night. And the Novacastrians, our old faithfuls, Gav, AJ and Ellie along with their ring-ins for the weekend, Flynn and Meg.

Before we delve into the on water activities, we’ve first got to relive the action off the water.

For Friday night, it was on the bikes and up to our mates at the Jervis Bay Brewing Co., filling up on some much needed necessities, and giving the Queenslanders a taste of whats to come for the 50th Hobie Cat Nationals later this year. After a quick stop off for a feed at Club Jervis Bay, it was back to basecamp for a night of reminiscence at Chez Butler.

Following the tune of the previous night, it was on the courtesy bus and up to the top of the hill to “The Golfie” to get a taste of the succulent Asian Cuisine we’ll all be smashing down our gobs on Preso Night for the 50th Hobie Nationals. Upon arrival back at Chez Butler, the time was spent yarning, singing, and knocking back a few of Paddy’s famous potions, before the Great Britain Sail Grand Prix – Plymouth at 2300hrs sharp. All that can be said, is that it was bloody unreal racing.. 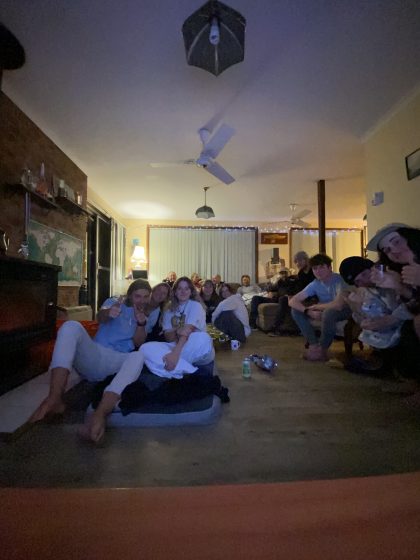 Eight Hobie 16s hit the the Bay over the duration of the weekend, providing a much needed splash of colour in the cool and gloomy conditions. Additionally, four Hobie 14s were gracious enough to dust off the cobwebs and join in with the big kids. Dobbo, Spinelli, Jezza, and newcomer to the VSC, Mark, were all chomping at the bit in the varied wind conditions.

Up and racing on home water, the Butler Boys were paired up once again as they continue to prepare for the Hobie 16 Worlds. Keeping with the father-son duos, Bryn and Adrian continued to make huge gains over the duration of the weekend, as Bryn slowly came accustomed to the luxury of a crew and a jib. 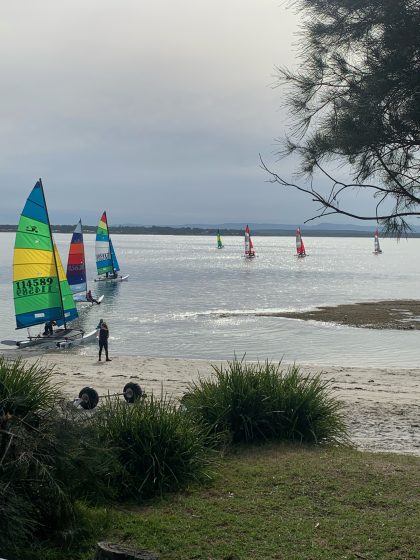 Gav and Branchy shared crews for the duration of the weekend. Branchy, who’s sailing with Carmen in the Masters, and Gav, who’s grabbing the hotshot for the Opens, swapped between Carmen and Jimmy the Kid across both days. Meanwhile, Pete and Jules on ‘Munyunga‘ were chipping away at the rest of the fleet, making the most of their time on Yuin Country.

On the Saturday, our up and coming superstar, Zoe, hit the water with her mate Char on ‘Cheeky II’. The pair were moving smoothly through the water on the 14-Turbo, whilst the older Ellis, Charlotte, jumped onboard with our honorary VSC member, Ellie, on ‘The Grommet Express‘. However, on Sunday, Zoe and Ellie teamed up to smash out a few starts before the wind faded into oblivion.

Meanwhile, the Big-Mac, Andrew, looked smaller than usual on “the big boat”, as Brody continued to find his groove working the jib in some tricky conditions. Clare and Helen hit the water on Sunday morning, and continued their hot streak of starts in the light breeze.

As the sun began to set on the weekend, Carmen and Ellie linked up on ‘The French Connection‘ to make use of the late nor-easter blowing across the bay. Whilst Jimmy and Brody were cruising around on ‘The Grommet Express’, the girls were confirmed to be absolutely sending it under the dying light. Topping it off, AJ and Flynn took their sister, Meg, out for the first time on a Hobie 16 and was trapping all around the bay. 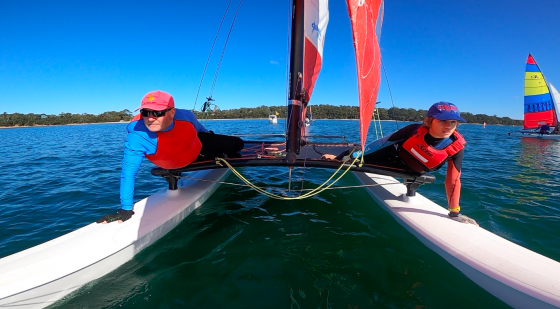 Finally, we’d like to say a huge thank you to our PRO for the weekend, John, who was back on his trusty steed ‘Poly‘. Also, we all owe his trusty new recruits and first time race officers, Rennie and Andrew, a beverage or two next time we’re down at Plantation. Last, but definitely not least, we have to thank Michelle and Barb for keeping us fed, hydrated and happy over the weekend. Their endless enthusiasm for us sailors kept us going all weekend long.

Be seeing you very soon….